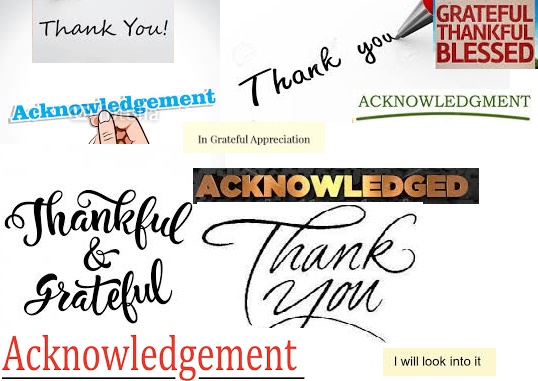 There were days when people used to send letter by registered post to make sure it reaches the destination. To get the confirmation for the delivery, a white colour tag was generally attached to the registered letter. The tag termed as ‘acknowledgement card’ was the proof of delivery of the letter to the receiver and the sender used to wait for the acknowledgement to come back to him. Most of the letters especially those sent to government offices were tagged with this card as people feared that the department or the people concerned may misplace or ignore the post.

The post has become electronic today, but the fear remains the same. People still wait for the acknowledgement of their mails/applications etc. that are submitted to the authorities. Almost all online services offer acknowledgement and a reference number to the submitter for the confirmation of the submission. But the mails rarely have the provision for acknowledgement especially when they are from different service provider. The received though in some cases puts an automated mail for the confirmation of the receipt. The official intranet at various offices has the provision to find out if the receiver has received and read the mail. But there too, it is not confirmed if the mail is read by the higher officials or their PAs.

Have you ever noticed the amount of satisfaction and happiness one gets in receiving an acknowledgement to a mail containing a query or request or a grievance? The acknowledgement though, may be just a two liner. Social media App WhatsApp has the provision to tell the sender if the message is read by the receiver or not and users meticulously utilize this crucial feature for their messages. A mail sent to a District Magistrate or a tweet sent to the Commissioner of Police, if gets even a one line reply stating that ‘I will look into it’, or a suggestion sent to a minister or a school principal, if gets a one liner, ‘Thanks for your suggestion’, boost the morale of sender multiple folds. That is the power of acknowledgement!

The habit of acknowledgement defines the sanctity of an office. An office that replies to all the mails received can proudly be referred as the most modern and ideal office. The percentage of mails that are replied defines the openness and caring attitude of that office or the person. Interestingly, based on the intent of acknowledgement, people residing in this planet can decide as to what type of person they are? Are they frustrated or jovial, efficient or ineffective, responsible or brassy, caring or forgetful etc.  Frankly, if the people occupying public spaces after providing their official ID in public domain, do not reply to the personal mails/posts, they commit a social as well as official sin. Why can’t they respond to the mails and win accolades from public. Actually one needs to further thank people for considering worthy of writing.

One needs to change the style of functioning of the office to keep up with the pace of human evolution and strive hard not to remain an object of erstwhile era. There are celebrities who reply to the tweets of their followers. The minister of external affairs of India helps the needy just based on one tweet. The former president of US was very proactive in replying to the mails. The genuine and humble world leaders take each and every form of communication addressed to them with utmost care. The current PM of India too responds well. It is all achievable; the only thing required is the intent and the will power. A small team can help filtering the junk and presenting the genuine messages to the concerned. Even at corporate level, the response of CEOs to the mails is outstanding. I remember my friend writing to the CEO of M/s Biocon, India asking for a drug for free to carry out her research. The CEO not only acknowledged the mail, she ensured that the required drug reached her without any hindrance.  Many companies act swiftly to the mails/grievances sent via online media. In a known case, LG Company exchanged the faulty refrigerator within 24 hours of writing a mail to the customer care ID. They could also ignore the mail like any government official, minister or CEOs and stay dormant. But they acknowledge every communication and take necessary action. That makes them professional and spreads the message, ‘I care’.  That is the need of the hour.

8 thoughts on “The power of acknowledgement”