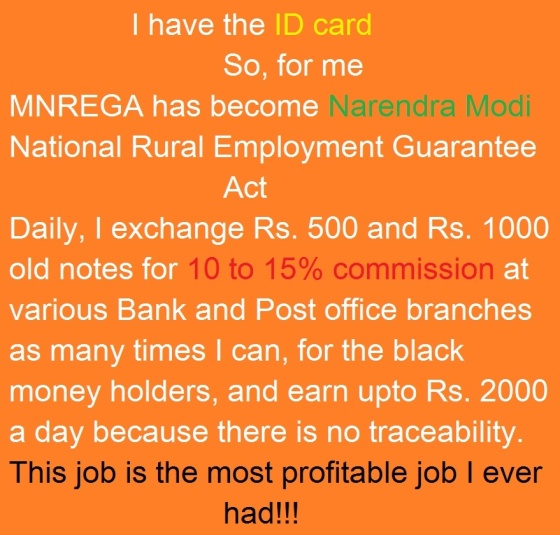 The opposition parties have come together under one black umbrella in the most childish act by the opposition parties in the history of independent India. They have only one argument, ‘The poor is getting affected by the ban on Rs. 500 and Rs. 1000 notes.’ Surprisingly, I could never understand, if the poor people are the biggest holders of those banned notes? Rs. 10, Rs, 20, Rs. 50, Rs. 100 all are under circulation, but the poor man is suffering because his Rs. 500 or Rs. 1000 notes is not getting exchanged or he is not able to draw money from ATM? Is that the life, deed, actions and plight of a poor man? Which are those reports that say that 75 % of rural households have a monthly income of less than Rs five thousand in India? This amounts to around 133.5 million families! Is the authentic report false or these politicians are lying? Which poor people are they talking about?

So in this ocean of poverty that has been watered for years, three in four households in rural India, earns less than Rs. 5,000 a month and there are whopping 90 % households who earn less than Rs.10,000 a month. Going by this figure, whether the limit of Rs. 24,000 a week imposed by the government is less? May be less for those who want MORE, but surely the poor man is not going to withdraw more than Rs. 96,000 in a month. END_OF_DOCUMENT_TOKEN_TO_BE_REPLACED

The late evening announcement by Prime Minister on the ban of Rs. 500 and Rs. 1000 notes in India had taken away the sleep of many currency keepers. Suddenly the entropy of the country had increased may folds. But, if we carefully observe, these currency keepers (CK) can be divided into three parts; END_OF_DOCUMENT_TOKEN_TO_BE_REPLACED