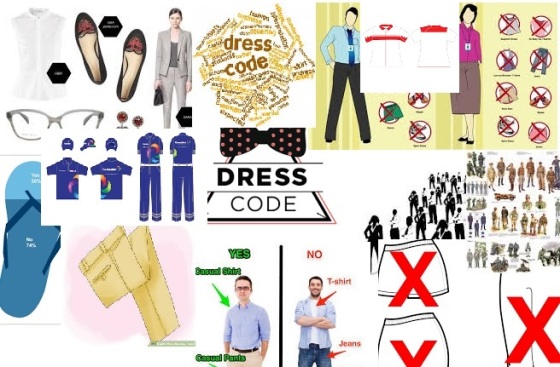 The dress code is essentially not the uniform code. It is a set of rules that are fed inside the minds of the people.  They change as per the circumstances, place and the occasions. The dress code for a workplace shall essentially be dependent on the factors such as type of work, type of industry, gender, tradition, religious and ethnic affiliation etc.

There are various voices on the dress code for workplaces. Some advocate uniforms, some encourage traditional outfits; some prefer western styles and some really do not bother at all. But by and large, a professional organization should have its own dress code policy. This is not to dictate what employees should wear but effectively to ensure what not to wear. The designated dress code should be compatible with the organization’s working culture and conditions. For a hospitality oriented business, companies adhere to formals and have clear instructions for that. For companies with machines and heavy engineering stuff, dresses are designed to keep employees safer.

For companies, who do not bother to assert any dress code for the employees, at least they need to take care of the social and cultural rules of the land. A dress that can trigger controversy, vehemence, remorse or any such feeling that may latter be responsible for the unrest and disturbance in the office atmosphere shall be totally banned? Thus emerges the unwritten dress code policy. It has become a fashion to come to the office, especially in the software industry carrying only the mind and the pair of hands with the first available dress on the body. But this comfort of living should not barge into the boundaries of the morals of the working. The clothes as they say give the first impression of a person and the dress code at a particular office surely displays the discipline and the seriousness of the people as far as the socio-moral responsibility is concerned.

Uniforms for the entrepreneurs also sound good but to certain so-called open minded lot, it may be like snatching their ‘right to dress’. Nevertheless, there are quite a number of benefits associated with the uniforms. It is truly an identity of the organization. It creates a sense of equality amongst the employees.  And from the human point of view, it takes away the tension from the employees head as to what to wear for office for the day. Those may be the reasons as to why some of the organizations especially the ‘government tagged’, have gone for the uniforms for their employees.

Essentially, all the salary drawing people who go to office, students who go to schools or colleges, hospitals, industries etc. should have dress code defined preferable in the kind of uniforms which can even be multi-colored. A company without uniform looks more like a fish market than a decent work place where it is difficult to differentiate an employee with a non-employee. The association of the employee with the company becomes more obvious to all and that enhances the sense of loyalty and ownership. And this works well everywhere, as the code becomes uniform and the uniform becomes the code.

2 thoughts on “Decoding the dress code”